Before coming to see Dr. Scionti, Mr. Hazell’s doctor determined he had an elevated prostate-specific antigen (PSA) level, which was followed by a prostate biopsy, which came back negative. Despite the results, a family history of prostate cancer led him to seek more information.

Hazell’s chiropractor told him about Dr. Scionti, and the newly FDA-cleared, HIFU therapy he offered. In search of an alternative to a prostatectomy, which can result in urinary and sexual issues, Mr. Hazell traveled to see Scionti, who diagnosed Hazell with the earliest stage of prostate cancer after performing a targeted biopsy. Shortly after, Mr. Hazell’s HIFU procedure was scheduled and then performed in Sarasota, Fla.

We checked in with Mr. Hazell six weeks after his procedure to learn about his experience. Here’s what he had to say:

“I’m doing real well, I had no pain. The first week following the procedure there was a catheter, and that was the only discomfort in the whole thing. 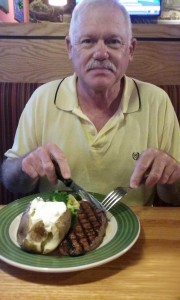 Hazell, hours after his procedure

I was able to go back to work after a week, but other than one week of being out of work it was great because I went on with my normal activities after.

HIFU was really nothing next to any type of surgeries I would have had. I’ve talked to others who had the surgery and this sounds much better. They were amazed that this type of procedure was available; my coworker had to have his [prostate] removed and his PSA was lower than mine.

I would suggest HIFU to anybody. Versus a surgical-type procedure to treat prostate cancer, this is a cakewalk. I didn’t have to have surgery and I still have my prostate. I think it was successful, and I did real well with it, so I would recommend it to anybody.”

Mr. Hazell will have follow-up blood work done in March to check his PSA levels and then another MRI check-up a few months later.

If you are interested in learning about HIFU as a potential treatment for your prostate cancer, call Vituro Health at 1.866.4VITURO (848876).